Tordenskjold: Boat of the Century, presented by Eat on the Wild Side, produced by John Sabella and Associates. Not rated, but suitable for all ages. 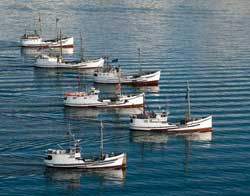 Most people think of 100-year-old fishing boats as museum pieces, tied up forever at a dock after a career at sea. But documentary filmmaker John Sabella has discovered a fleet of historic ships—one celebrating its centennial this year—that still head to Alaska on the hunt for black cod and halibut. This week, the Port Townsend, Wash.-based Sabella premiered his newest work on the history of the halibut fleet to an audience in Seattle. It’s an entertaining and educational peek into an almost invisible present and past, even in a town with a thriving maritime industry.

The 30-minute video is titled “Tordenskjold: Boat of the Century,” (pronounced roughly “TOR den skee yold”), taking its name from the oldest vessel, a 90-foot halibut schooner launched from a Seattle boatyard in 1911. It’s one of six boats built in the first third of the 20th century, all based in Ballard, a neighborhood founded by Scandinavian immigrants in the late 19th century. Most are owned and operated by descendants of the immigrants, and a number of the vessels have been handed down from father to son. Sabella describes the industry as “clannish;” most boats are crewed by family and close friends, though one owner, John McHenry, is from Pennsylvania.

Sabella deftly mixes studio interviews with owners such as Tordenskjold’s Marvin Gjerde and Vansee’s Per Odedaard with color and black-and-white historic footage that shows how halibut fishing methods have barely changed over the past century. Sabella opens a window into the culture of the halibut fishery, which one interviewee describes as “cautious and conservative,” a mindset that has guided the fleet into a path of sustainability, a buzzword that just means good management for the long haul.

The video is a something of a paen to an unsexy industry—commercial fishing—an industry sometimes treated as an anachronism by a mainstream media enthralled by celebrity CEOs and silicon gadgetry. The content could have been balanced by more voices from women and workers lower down the food chain, so to speak, though the compelling images of fishermen working in horrendous, life-threatening conditions could’ve come straight from the Deadliest Catch. Tordenskjold is a great addition to a maritime history buff’s DVD collection.