I’m starting a new occasional feature on my blog called Five Questions. I’ll ask an author five interesting questions and post their answers. Check out the answer for the bonus question! My inaugural guest is Elizabeth Guizzetti, a personal friend whom I met through a sci-fi and fantasy writers group in Seattle. Elizabeth loves to write science fiction, horror and fantasy with a bit of social commentary mixed in, not always intentionally. Her 2012 debut novel, Other Systems, was a finalist for the 2016 Canopus Award. Her most recent novel, The Grove, is on sale now.

Do you remember the first character you created? Tell me about him/her/it.

This wasn’t my first character, but the first character I remember was a ten or eleven-year-old girl trying to survive a werewolf apocalypse. I tried to write her tough, my mother said she was kind of rude to the two young men who she was with. (I think they were high schoolers, because at that age, high schoolers are super cool.)

How did you feel when you saw your work in print / electronic form for the first time?

My first published work was Faminelands: The Carp’s Eye which is a self-published graphic novel. It came out in print first and then we started the webcomic. It was (and always is) a roller coaster. It felt wonderful the first time I flipped through it, as well as terrifying. We were making changes up until it had been printing and I had a table at Emerald City Comicon 2008. It was crazy. Those feelings have been just as intense for every book that has gone through the publication process.

I made a video about I feel when holding my book for the first time if anyone wants to check it out on my YouTube Channel.

What is your favorite piece of advice for new writers? 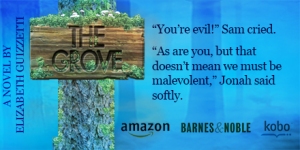 If you want to be an author, you must put your butt in a seat and put your hands on your tools. Set goals for your project. Finish it (yes that includes editing), decide on your publication/marketing path, do that and then move on to the next project. Each time you will learn. Each time you will get better. So, never give up and never surrender!

If you were queen, what would you change about the publishing world?

Anyone who claims that they are on the One True Path—whether that is independent publishing or traditional publishing or small press publishing—gets their mouth taped shut for an entire convention. There is no one path to success. Many people, myself included, have certain projects published and self-publish others. They may have more financial success in one genre, but work in multiple genres.

What is your next project? Timeline?

I have a self-published science fiction anthology with three alien stories coming out the spring. I’m also under a collaboration contract illustrating a science fiction graphic novella/webcomic. There is no timeline for publication yet for that project. We are still in the beginning stages.

Bonus: If you could reincarnate as another writer, living or dead, who would it be?

Elizabeth Guizzetti. She’s awesome. Wait, that’s me! Just kidding. I am never good at these types of questions, because of diseases such as the plague (Shakespeare) typhus (Dickens), etc. I would want to live as any author who lives today and has a heated swimming pool.

3 thoughts on “Five Questions: Elizabeth Guizzetti, author of The Grove”