The Future History of the Grail / Tales From A Warming Planet

The names of astronaut Neil Armstrong and rocket engineer Werner von Braun are etched forever on the popular mind as pioneers of outer space exploration. But they have eclipsed equally daring and dangerous exploits under the sea that happened at almost exactly the same time Americans were reaching for the moon. Author Ben Hellwarth in Sealab: America’s Forgotten Quest to Live and Work on the Ocean Floor attempts to correct this imbalance by examining the history of a particular type of underwater exploration called “saturation diving,” which put free swimming human beings at depths approaching a half-mile. And like the country’s space program, the quest to live in the deep ocean has come to a virtual halt.

Much of Hellwarth’s story focuses on George Bond, a country doctor who joined the Navy just after World War II and quickly developed an interest in diving. The technology for diving had barely budged since the invention of the classic hard-hat and rubberized canvas suits in the late 19th century. Men could go down to a depth of 100 feet or so, and the bends—painful bubbles of nitrogen that formed as divers rose to the surface—could be deadly. Bond determined to push the boundaries of diving, and with a team of Navy divers and technicians, research ways to go deeper and return without death or serious injury. Bond started on a shoestring, but after painstaking trial-and-error, found ways to put divers down as far as a thousand feet in relative safety. He “saturated” the divers’ tissues with breathing gases, notably helium, which made decompression easier and safer, and allowed them to live in undersea habitats for as long as a month. 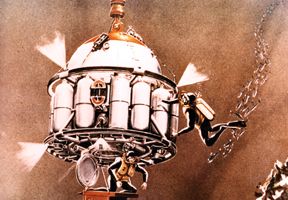 It’s likely Bond’s story would’ve been completely forgotten if it weren’t for what Hellwarth calls a “celebrity diver” by the name of Jacques Yves Cousteau. Anyone who grew up in the sixties and seventies remembers watching the amazing adventures of the exploration ship Calypso and hearing Cousteau narrate in his unmistakable French accent. But for true followers of the dream of living for long periods on the continental shelf, Cousteau was mostly a showman who rarely went down more than a few fathoms. Real pioneers, including Bond, Navy diver Bob Barth, inventor Ed Link, Frenchman Henri Delauze, and a host of commercial divers, pushed the boundaries of deep water work, sometimes sacrificing their lives in the process.

Although overshadowed by the competition between the Soviet Union and the United States in space, Sealab and the quest to live below the sea in habitats wasn’t quite as invisible as Hellwarth suggests. I remember as a nerdy child reading about Sealab and the divers who made it their home in the late 1960s. TV shows such as Voyage to the Bottom of the Sea, Sea Hunt, and Primus brought these ideas to the general public. But it’s true that the lack of an international competitor on the sea bottom probably contributed to the occasional “mail-order catalog” feel of the projects, as one of Hellwarth’s sources puts it; saturation diving never got the kinds of budget support enjoyed by the space program.

The sad codicil to the story of saturation diving is its similarity to the apparent abandonment of manned space exploration by the United States. Most of the research and experimentation by the Navy ended in the 1990s; both government and business turned to remotely operated vehicles, which can go far deeper than any free-swimming human, and special hard suits, which look very much like space suits, only made of steel. Like the nation’s space program, which is stuck in the doldrums today with no way to put people in orbit, the diving program has reached a stopping point. Although the technical barriers are daunting, we should hope that we’re only in a pause until our quest to go into inner space, as well as outer space, can begin another chapter.