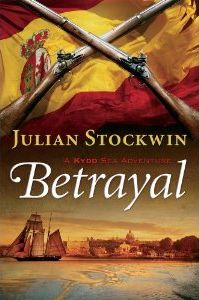 Most authors of nautical fiction from the Napoleonic Era place their characters somewhere in the Northern Hemisphere, usually the Atlantic or the Mediterranean. That’s where most of the historical action was, of course. By contrast, the Southern Hemisphere, apart from the Cape of Good Hope, seems devoid of action. Julian Stockwin has found an exception to this rule, and he’s successfully exploited it in Betrayal, the 13th book of his series on the fictional exploits of Captain Thomas Kydd.

As commander of the frigate L’Aurore on station at Cape Colony, Kydd finds himself under Commodore Sir Home Popham, an able naval administrator and barely competent combat officer with a tendency to bend the rules a little too far, especially if there’s something to go in his pocket. Popham sees a chance east across the South Atlantic at the Spanish colony of Buenos Aires, located on the Rio de la Plata, a broad estuary known as the River Plate to the British. After hearing rumors of a discontented populace ready to throw off Spanish rule, the commodore hatches a scheme to invade the region with 1,400 soldiers and a few ships. Kydd, though skeptical, signs on, partly out of deference to his boss and partly for the chance to expand his country’s growing empire. Kydd’s best friend and sometime spy, Nicholas Renzi, familiar with Popham’s reputation as an opportunist, sees the plan as nothing more than a dangerous adventure.

The historical episode is real: In 1806, Popham invaded the colony, and the results were nothing less than a fiasco. I can’t help but think of the U.S. invasion of Iraq in 2003, when Americans were promised that the Iraqi people would welcome soldiers and marines as liberators. Exactly the opposite happened, and Popham experienced the same turn of events in Buenos Aires, as Stockwin tells the tale.

Stockwin is at his best when he places Kydd and the other British officers and soldiers in the thick of the action. But he stumbles with his local characters; a woman especially comes off too much like the “hot-blooded Latina” stereotype. And the ending of Betrayal is unsatisfying. The true ending of the story is in the Author’s Note, in which Stockwin details how a fiasco turned into an unmitigated disaster. One wonders what the fictional Kydd really thought of the unprincipled Popham, something Stockwin promises we’ll learn in a future Kydd tale.